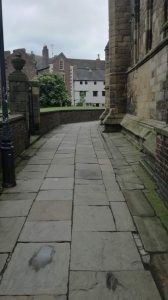 A flagstone on the pathway between the abbey and the old Campy Hill graveyard. Avoided by generations of Hexham children and marked by many years of spitting for good luck! This tradition may originate in the idea of the Plague Stone, as mentioned in Fairless’s 1853 Guide to the Abbey Church of Hexham:

Plague or Silver stones were placed … when the plague existed in a town, one of the parties in money transactions deposited the money in a cavity on the stone, and retired to a distance, while the receiver advanced and took it out, thus avoiding contagion.

However, living memories of this particular stone only seem to date back to the 1980s, so this may be an example of a newly-minted legend – unless you know differently?

A Newcastle malediction, or curse. (From Denham Tracts)    Possibly a reference to Hexham’s purpose-built gaol – the first in the country.

Where they knee-band lops [fleas] and put spectacles on blind spiders. (From Denham Tracts)

Hexham (from the other side of the Border)

Hexham was used in the Borders as a euphemism for Hell.   Hence the term “To Hexham wi’ you an’ ye’r whussel!”, recorded in 1873, and the popular expression “Gang to Hexham!”.   Hexham-birnie is derived from the term and means an indefinitely remote place.   (From Watson, G (1923) The Roxburghshire Word Book)

Presumably from a confirmed townie!

Silly – good-natured, like a Hexham goose; bid him sit down and he will lie down. (From Denham Tracts)

The Hexham Heads were a pair of small stone heads, about 6 cm high, found in 1971 in the English town of Hexham. The heads became associated with alleged paranormal phenomena, and their exact origin is a point of controversy.

The heads were originally dug up by two boys, Colin and Leslie Robson, who found them in the garden in 1971; a number of sources incorrectly give the year as 1972.  After the discovery, the Robson family reported strange phenomena, with the heads allegedly being moved when no one was in the room and bottles being mysteriously thrown across rooms.  The Dodd family next door also reported phenomena, with one boy’s hair pulled in the night and his mother Nelly seeing a half-man, half-sheep figure leaving the house shortly afterwards.

The heads were subsequently given to Dr Anne Ross, an expert in Celtic artefacts.  According to Dr Ross’s own account, she woke up one morning and saw a part-animal, part-man figure walking out of the room; she followed it downstairs and saw it heading towards the direction of the kitchen, but then lost track of it. A few days later her daughter Berenice told her that, after returning home from school, saw a large, dark, werewolf-like figure on the stairs that jumped over the banisters and into a corridor before vanishing, the wolf believed to have some relation to the Hexham wolf that killed livestock in the winter of 1904.   Ross also reported the feeling of a cold presence, her study door bursting open with no apparent cause and another apparent sighting of a dark figure. Knowing of Nelly Dodd’s experience, Dr Ross equated all of these phenomena with the Hexham heads and the incidents allegedly stopped when she removed every Celtic head in her possession out of the house, along with the two Hexham heads.

A man named Desmond Craigie reported that he was the creator of the heads, making them in 1956 for his daughter while he was living in the house later occupied by the Robson family, along with a third head which became damaged and had to be thrown away.  Craigie, who worked for a company that dealt in concrete at the time he allegedly created the heads, made some replicas to demonstrate his claim. The original heads were analysed by Professor Dearman of the University of Newcastle, who concluded that the items had been moulded artificially rather than carved.

The original heads were later lost, their current whereabouts are unknown.

Up heaped, pressed down, and flowing over. (From Denham Tracts)

Probably originates from the fact that, prior to the national standardisation of measures, the quarter-peck measure in Hexham was twice the size of that of Newcastle.

Probably related to the Hexham Measure – see above. (From Denham Tracts)

Everyone for their ain hand, like the Pipers o’ Hexham. (From Denham Tracts)

On May 5th 1957 two girls, Jacqueline and Joanna Pollock, were hit by a car and killed on Hencotes while walking to St Mary’s Church with a friend. Their parents, John & Florence were understandably devastated but John, despite his Catholic faith, insisted that the couple would soon have a set of twins. At first sceptical, Florence soon showed the unmistakable signs of pregnancy and, in due course, twin girls arrived and were named Gillian and Jennifer.

It soon became apparent that they startlingly resembled their departed sisters; Jennifer had a white line on her forehead where Jacqueline had had a scar and bore the same birthmark as Jacqueline! As the twins grew, Florence and John saw increasing similarities and became more and more convinced that the two girls were their late sisters reborn. The family left Hexham when the girls were still babies but returned to the town when the girls were aged four. On their return, both girls were able to identify landmarks such as the school their sisters had attended and were able to name dolls and toys belonging to their sisters. They even had nightmares about being run over by a car. Jennifer also looked to be older than Gillian, despite being a twin; Joanna had been five years older than Jacqueline. Then, as they turned five, all memories of their former lives faded away.

A hollow in the woods at Swallowship in Hexhamshire. Reputedly the place where Queen Margaret took refuge after the Battle of Hexham in 1464 and encountered a gallant robber. Unfortunately, the historical record shows that Queen Margaret was in France at the time of the battle! Further information the legend (and the battle) is in Hexham Historian 8. The battle is also covered in an article by Timothy Owens in Hexham Historian 24. An article in the Hexham Courant also debunks the myths of the Battle of Hexham and the Queens Cave.