The picture clues are stone plaques on the facing wall of the County Mills Building on the south side of Priestpopple. You might be able to see two of them in the picture above the white doorways on the left-hand side, and the third to the right of the restaurant that was open when the picture was taken.

The building currently houses Gibson’s Solicitors and (sometimes) a restaurant. It was originally a grain warehouse until it was converted to retail units and flats in the mid 1980s. The building was occupied by West Cumberland Farmers’ Trading Company from at least 1971. 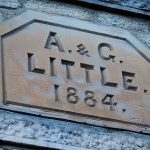 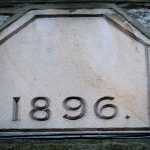 This plaque clearly relates to A&G Little’s Flour Mill and grain warehouse that was built on the site of the former Northumberland Brewery in 1884. Bulmer’s Directory of 1886 list Andrew & George Little, millers, County Roller & Tyne Mills, so they may well have been the original owners. Whether the 1896 plaque relates to the date at which A&G Little vacated the mill is not (yet) known.  It was reported that in 1901:

The malting house of the old brewery in Priestpopple, Hexham, which had been in a dilapidated state for some time, fell down crashing on to Bell’s, the cartwright’s shop next door, completely demolishing it.  Three traps standing outside were broken and another new one was completely buried in the debris. [Hex. Cour. 9.3.2001 – 100 Years Ago.] 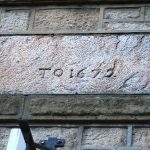 The significance of the date on this stone plaque is not (yet) known. Does it relate to something about the Northumberland Brewery, or to an earlier use of the site?

If you have further information to share, try  the Leave a Reply feature below that we are experimenting with this month.