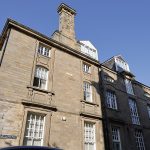 The clue showed the chimneys on the building at the North corner of St Mary’s Wynd and Beaumont Street. (Thanks to Stefan for these photos.)

Now comprising retail units on the ground floor and apartments in the upper floors (“The Granary”), the building was originally Temperley’s grain warehouse until converted to its present form in the 1980s. John Chapman refers to the building as the Old Granary in his book A Walk Back In Time.

The building, 9 Beaumont Street, was build in 1877 for W. A. Temperley and Co. The Temperley family were grain and feed merchants, and siting this building close to the Corn Exchange in Beaumont Street (now the Queens Hall) clearly had some commercial sense.

From the Autumn 2008 HLHS Newsletter (from information provided by Colin Dallison):

In 1827 Nicholas Temperley was a grocer selling butter, bacon, cheese, tea and flour from premises in Market Street. The Temperleys are described in a directory from the late 19th century as “an old established and well known firm of merchants and importers with premises at Hexham, and Newcastle.” The directory goes on to state that “The name Temperley has been a familiar one on Tyneside for several generations, and the establishment of the firm dates from 1801… the firm do an extensive business in home produce, and as importers of cargoes, and direct steamer shipments of various descriptions of foreign oil-cakes, grain, and other feeding materials…They also act as agents in the district for one of the largest Hungarian flour mills at Budapest”
The Temperleys left quite a mark architecturally in Hexham. In 1826 Temperley Place was built on the north side of Hencoates and in 1859 William Temperley built Westfield House at Hexham at the substantial cost of £1,047. His eldest son Nicholas laid the foundation stone on his fifteenth birthday, February 14th 1859. The house was sold in 1877, after being let for a few years, to J. Hope for £11,000 and later became Hexham Hydro. The same year, 1877, 9 Beaumont Street, an “essay in free Baroque” according to Pevsner, was built for W. A. Temperley and Co, followed in 1897 by 7 Beaumont Street.

The record of Hexham shops from 1971 (available to HLHS members in the Members Library) lists 9 Beaumont Street as W A Temperley, Agricultural merchant up to 1983. By 1986 the Universal Building Society is recorded as the occupant. 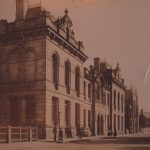 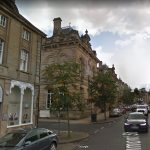 Here are views of the front of the building, that on the left circa September 2018, from Google Maps Street View, and that on the right  circa 1890. In that on the right you can just make out the “Co”  of  the sign for “Temperley & Co”, and the advertisment for “Grass, Seeds and Cloverseed” in the right-hand window.