Hexham Historian 25  (2015). This edition of HH is out of print. However, do not despair. The individual articles are available as PDFs for download. Please click anywhere on the Articles below to get to the set of articles.

Articles:   William Blackett, Dukesfield, and the 17th century lead industry; The Mulcaster family: a lead mining dynasty; Two broadsides from Allenheads; A poem, a bazaar and the building of a new chapel; Hexham Turnpike Road; A dying breed: the country labourer’s cottage; Hexham in 1825; Escaping Hexham: the 1538 and 1608 reports on the gaol breaks; Old Haydon and Haydon Bridge; Stannington Children’s Sanatorium and its Hexham history. 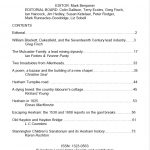 Click on this thumbnail to see the contents page.

Editorial For HH 25, by Mark Benjamin

The Dukesfield Arches Project continues to produce fascinating material and this issue contains two articles emanating from the project. Greg Finch and Ian Forbes both contribute studies of men whose work was essential to the success of the lead industry in the area. Sir William Blackett was the entrepreneur responsible for the creation of the site, whilst generations of Mulcasters acted as agents for the Blacketts, ensuring the efficient running of the industry. And, although from a slightly later date, two broadsheets from Jim Hedley’s collection reflect the other side of the industry, that of the workers
and their grievances.

Richard Young’s article looks at the type of dwelling in which many of the Dukesfield miners may have lived. The design of the labourer’s cottage varies greatly across the country, depending greatly on the materials close to hand. Now seen only in museums such as Beamish or, in much-altered form, as holiday cottages, these were the homes for the majority of Northumbrians throughout the centuries.

We reprint a timely companion piece to Dirty Old Town, the latest of our Occasional Publications series. Eneas McKenzie’s description of Hexham in 1825 shows the town in the period which explains the call for Rawlinson to write his report. Whilst on the subject of decay, two reports on gaol-breaks show that local government cutbacks are nothing new!

On a more spiritual note, Christine Seal’s article traces the building of Trinity Methodist Church on Beaumont Street, the Wesleyan Methodist congregation having out-grown its previous accommodation on Market Street.

Some years ago, the noted local historian, L C (Charlie) Coombes, wrote a comprehensive but unpublished history of the Barony of Langley. We have long contemplated publishing the entire work but this has proved difficult. The entire work will be made available in the Members’ Library but, as a taster, we publish an extract covering the early hamlet of Old Haydon, edited by Greg Finch.

And, finally, a chance posting on the Society’s Facebook Page from the Stannington Sanatorium Project shed illustrated a little-known aspect of the Hydro’s history. During the Second World War, tubercular patients were evacuated to Hexham and housed in the Hydro. Karen Rushton, from Northumberland Archives, relates the episode and includes the memories of some of the patients.